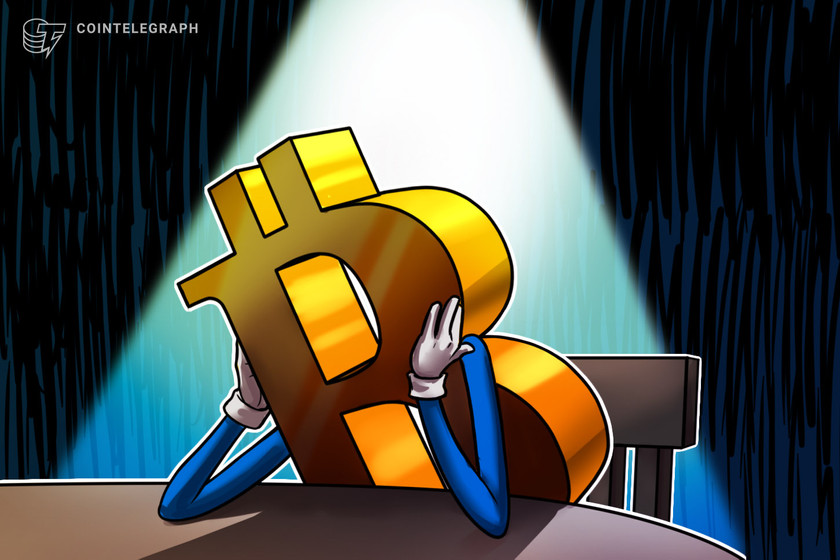 Bitcoin (BTC) starts a new week under $30,000 as the battle to save the market from fresh lows grinds on.

After hitting its highest since the Terra LUNA crash last week, the largest cryptocurrency nonetheless continues to fail to reclaim $30,000 as support.

What could be in store this week? The potential for major upheaval from macro players, notably the United States Federal Reserve, is shapeshifting this week ahead of the World Economic Forum.

At the same time, internal crypto market pressure remains as the implications of LUNA’s collapse continue to play out.

The sense of caution among traders is palpable this week after the past seven days upended market expectations.

When Blockchain protocol Terra’s LUNA and TerraUSD (UST) tokens imploded, their decline ricocheted throughout crypto markets, and Bitcoin was naturally no exception.

After dipping to near its realized price just below $24,000, BTC/USD staged something of a V-shaped recovery to bounce past $31,000 in the following few days. That strength, however, now appears limited, as $30,000 proves to be a stubborn level to win over for good.

While the picture looks decidedly more reassuring than that of some altcoins, traders are keeping away from any firmly bullish price takes.

A key narrative gaining traction revolves around current levels forming the basis of a relief bounce which will ultimately end not just in rejection but an attack on lower lows than those from last week.

This for me is the best case scenario on #Bitcoin due to the rejection and 3 wave confirmation. We either drop to new lows from here, or we complete the C wave flat then pump once more

If your a scalper this will be heaven for you over the next few days pic.twitter.com/LNvVbpXPG6

“Just as us bulls fought the trend for the past few weeks, I think bears about to deny or refuse any more upside,” popular Twitter account IncomeSharks said in part of two recent posts on the BTC/USD outlook.

It added that those only now flipping bearish, however, will “get too stuck in their bias.”

Fellow trader Crypto Tony meanwhile said that the pair needs to reclaim $31,000, not just $30,000, in order to continue higher thanks to the former marking the highs of the week’s range.

Zooming out, the picture hardly seems any less precarious than on hourly or daily timeframes.

The weekly BTC/USD chart, despite the modest recovery, closed its seventh red candle in a row on May 15 — the first time in history that such an event has occurred. The week closed out at around $31,300, data from Cointelegraph Markets Pro and TradingView shows. 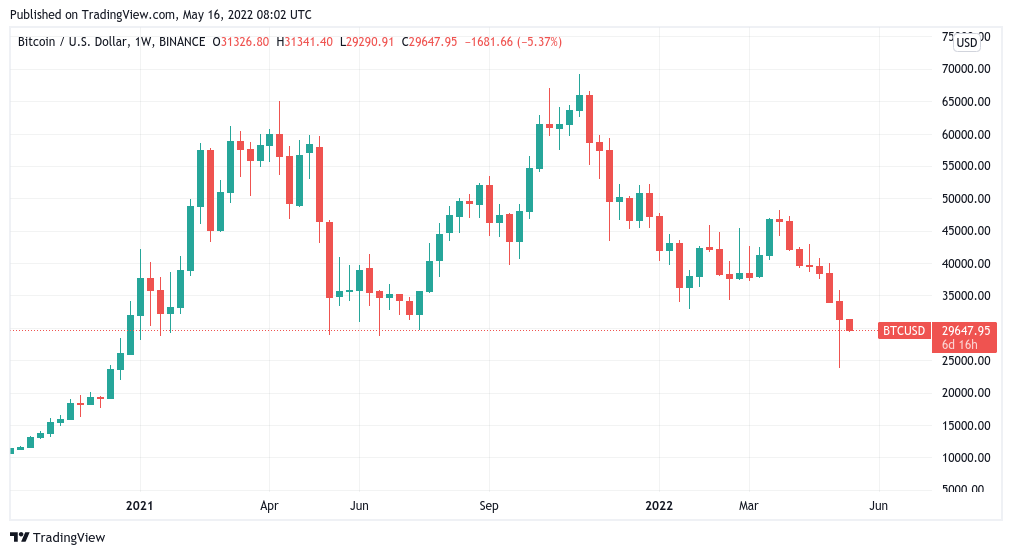 Pondering whether protracted downside could continue much longer — even beyond 2022 — Twitter account Nunya Bizniz noted that leading into block subsidy halvings, Bitcoin has historically been far below all-time highs.

As such, it would fit historical precedent for BTC/USD to trade significantly under $69,000 at the time of its next halving in two years’ time.

At halvings, price has been considerably below ATH.

Last week saw the Fed grapple with inflation, rate hikes and geopolitical strife, all factors that were ironically eclipsed almost immediately by Terra.

By contrast, no announcements of such significance are expected this week, but the underlying tensions have not gone away.

As such, the Russia-Ukraine war, inflation and measures being undertaken to mitigate it remain the topic du jour for central banks around the world. This will no doubt be a major topic of the World Economic Forum as the 2022 event begins on May 22.

The Forum, and the potential for Bitcoin-related soundbites from attendees both positive and negative, will follow a different gathering this week in El Salvador, where representatives of 44 countries will discuss Bitcoin.

“Tomorrow, 32 central banks and 12 financial authorities (44 countries) will meet in El Salvador to discuss financial inclusion, digital economy, banking the unbanked, the Bitcoin rollout and its benefits in our country,” President Nayib Bukele confirmed on May 15.

At the same time, the U.S. dollar refuses to quit when it comes to strength versus major trading partner currencies.

The U.S. dollar index (DXY), despite local consolidatory phases, remains in a firm uptrend which has denied bears a macro top for months.

“At the same time, the Euro is testing it’s 5-year lows vs the U.S. Dollar,” analyst Blockchain Backer tweeted as part of a thread on the macro environment as it relates to crypto.

“The Euro is a major component of the U.S. Dollar Currency Index (DXY), and historically has been acting inversely to the DXY.” 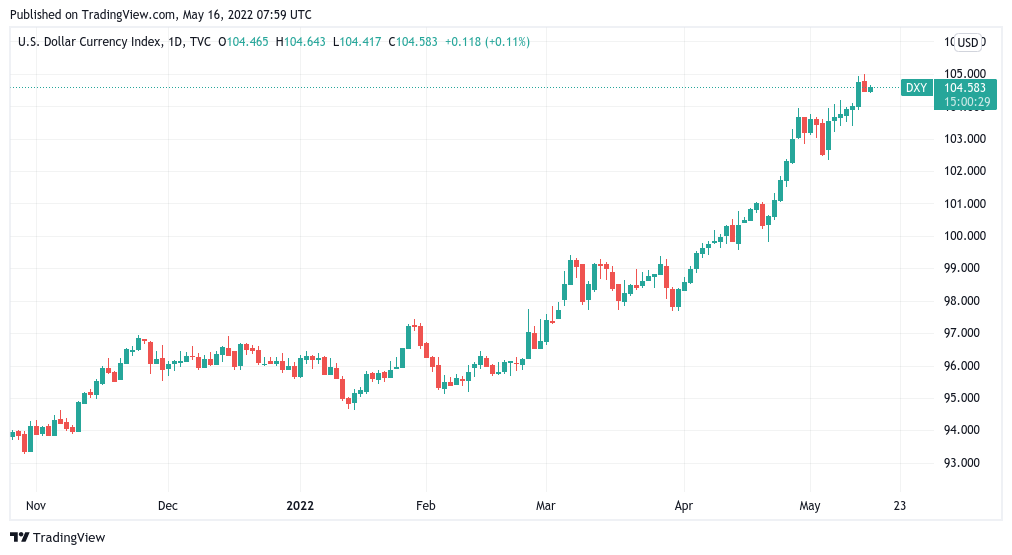 “So, we have a lot of things happening here. Dow Jones below support break from last week. DXY in 20-year highs. EURUSD on support. Altcoin Market and Ethereum with similar correction structures seen before. But, no coins are flying as if a reversal is in,” the thread continued.

Tether crawls back from 5% depegging

Regardless of upcoming events, it is the ghost of last week’s mayhem that is haunting the market on Monday.

The aftermath of the collapse of Terra’s UST and LUNA tokens is not yet fully understood as data continues to trickle in about both the breakdown and the company’s plans to mitigate the fallout.

Some facts appear clear, yet have not been officially corroborated, such as mass selling of the Luna Foundation Guard’s (LFG) BTC reserves. Others remain rumors, notably mass insolvencies of organizations with LUNA and UST exposure.

What happens next is equally unclear, and as Blockchain Backer notes, no one knows for sure whether the sell-off is done.

“Last week there was a devastating hit on LUNA and UST. We don’t know the complications of this and who took collateral damage from it yet,” it summarized.

“Were there other treasuries exposed to this? Has LFG sold off all their Bitcoin reserves, or is there more left? We don’t know.”

Attention is not just on UST, however, but on the industry’s largest stablecoin by market cap. Tether (USDT) saw its dollar peg slip last week, and despite there being no signs of a repeat UST performance, 1 USDT still does not fully equal 1 USD as of May 16. 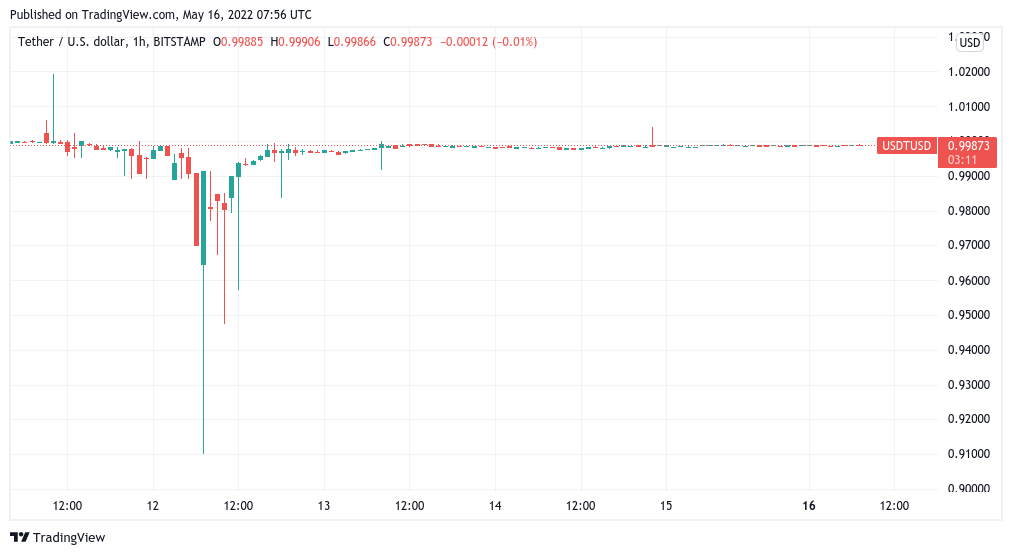 “When things started hitting the fan for TerraUSD (UST), it started with a small slip, then spun out of control,” Blockchain Backer added.

As Cointelegraph reported, Tether’s creators have vocally defended USDT’s ability to ride out the storm thanks to its structure being inherently different from UST and algorithmic stablecoins in general.

“Over the next few weeks, we will start to know the full extent of damage as reports of significant losses and collapses emerge,” Crypto trading firm QCP Capital told Telegram channel subscribers in its latest update on May 13.

“In spite of the carnage however, we are heartened by the resilience we’ve seen in particular segments of crypto.”

LUNA continues to see uncontrolled volatility, making it all but impossible to chart on any timeframe, and at the time of writing on May 16 traded at 0.00023 on Bitfinex. 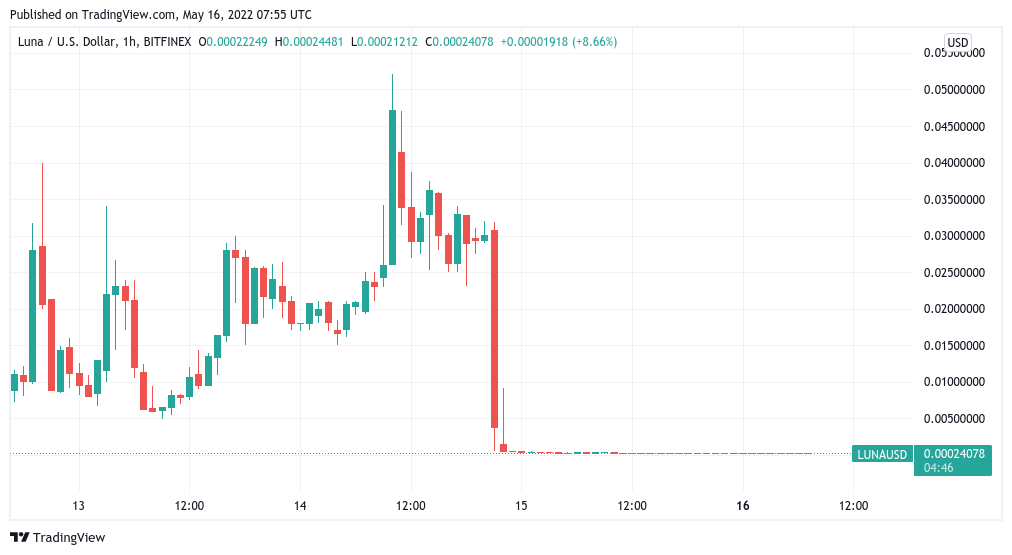 Analyst: Institutions stepping up to buy

Is anyone buying Bitcoin? Data says that the answer to this is a firm “yes” from certain market segments.

In analysis released on May 16, Ki Young Ju, CEO of analytics platform CryptoQuant, highlighted interest from institutional investors as a key phenomenon of Bitcoin between $25,000 and $30,000.

Ki explained that while the LUNA debacle had forced bids down toward $25,000, overall bids had remained the same for a year. Not only that, but those bids could now be mitigating the sell-offs related to Terra.

“If you see the BTC-USD order book heatmap for Coinbase, it’s pretty thick bid walls since the latest bear market in May 2021,” he noted.

“I think institutions tried to stack $BTC from $30k but had to rebuild the bid walls at $25k due to the unexpected LFG selling.”

An accompanying chart shows how events played out on Coinbase, the exchange that Ki says received the bulk of Terra-related funds for sale. 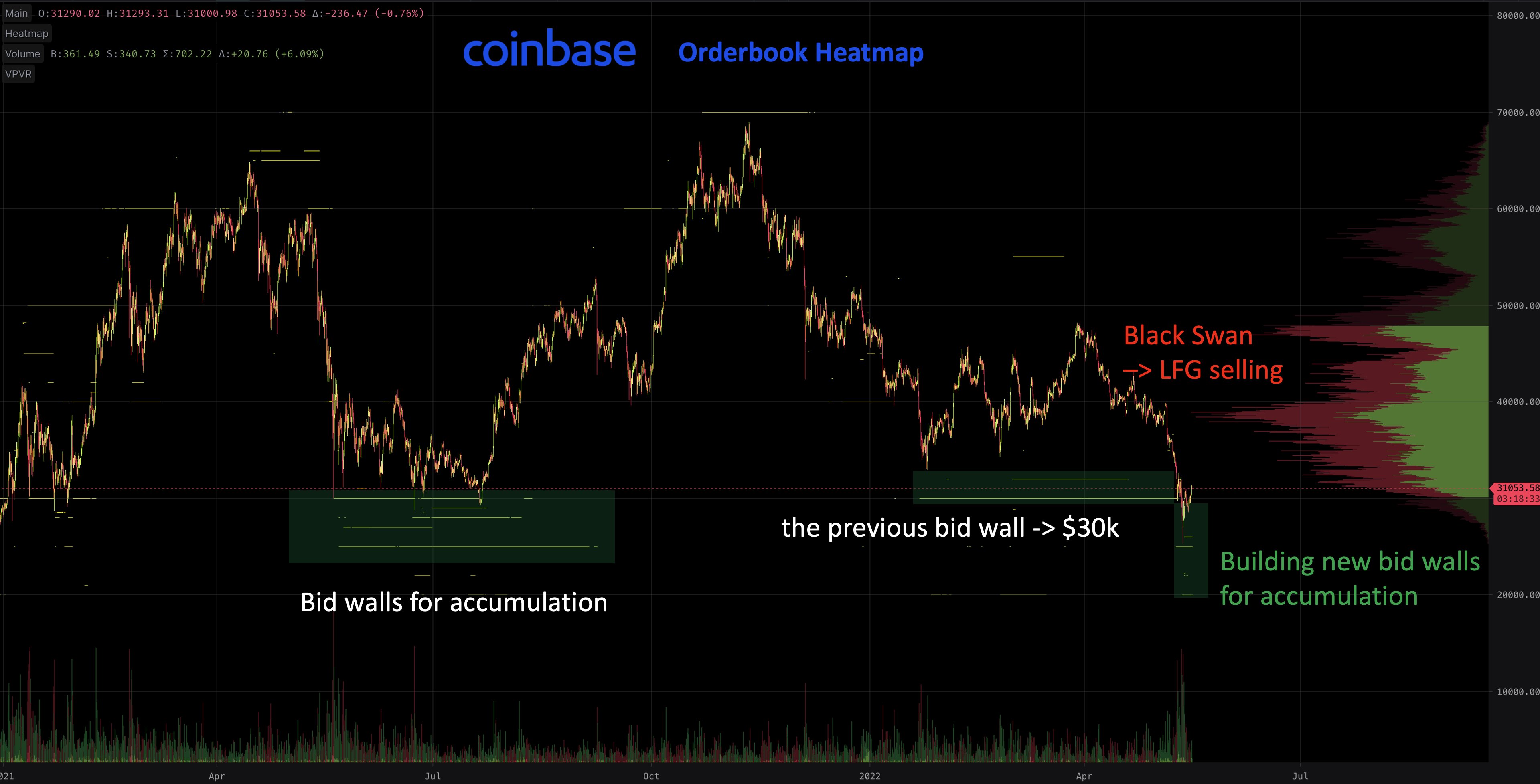 It is likely not surprising that crypto market sentiment remains on the floor.

Reflecting nerves over price stability, the Crypto Fear & Greed Index is firmly in “extreme fear” territory this week at 14/100.

Having hit historical bottom territory last week, the recovery has been conspicuously less robust than the original fall, which took the Index from 27/100 to 10/100 in five days.

Behind the scenes, however, all may not be as bleak as it seems.

“The silver lining to this -33% drop the past 3 weeks is that $BTC’s address activity has remained steady,” it wrote in Twitter comments.

“The divergence between addresses & price is at a 16-month high.” 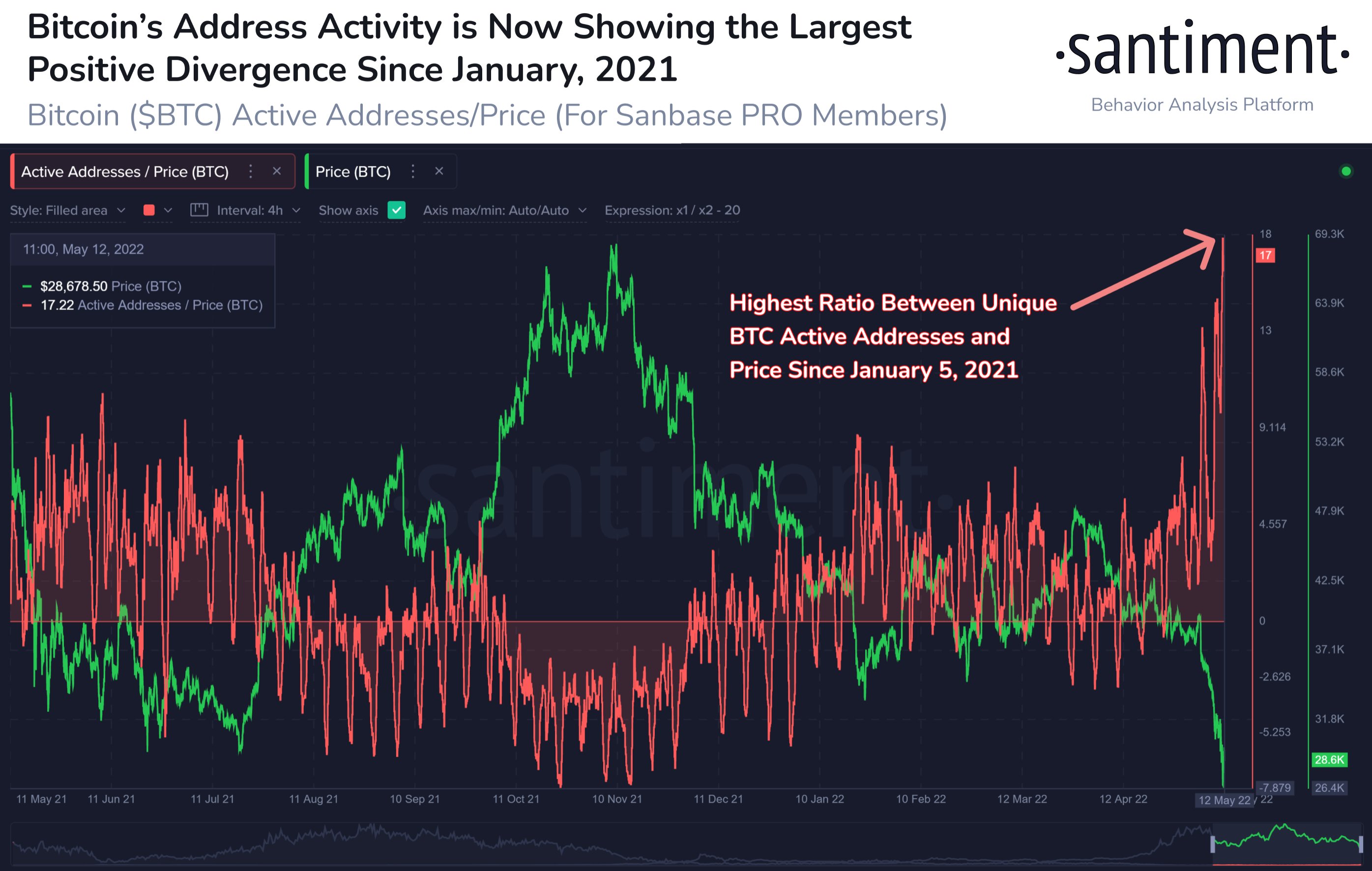