Coming every Saturday, Hodler’s Digest will help you track every single important news story that happened this week. The best (and worst) quotes, adoption and regulation highlights, leading coins, predictions and much more — a week on Cointelegraph in one link.

Kazakhstan, which accounts for the second-largest Bitcoin mining hash rate in the world, suffered a nationwide internet blackout earlier this week after soaring fuel prices triggered a wave of violent protests in the city of Almaty.

According to reports from local network data provider NetBlocks, Kazakhstan’s normalized network connectivity fell to around 2% on Wednesday, which was likely the result of the government limiting “coverage of escalating anti-government protests” relating to surging fuel prices.

GameStop is rolling out an NFT marketplace later this year under the new division, which reportedly consists of 20 employees. The NFT unit will also be tasked with seeking partnerships in the crypto sector for future NFT game development.

The Wall Street Journal quoted the good old “unnamed named sources close to the matter” when reporting on the information, and stated that GameStop is close to securing deals with at least two crypto firms so far.

“The author credited ‘the people’ as the only source I saw. This is anything but journalism,” wrote Redditor u/MrFlags69, commenting on the news in the r/Superstonk subreddit.

Ethereum co-founder Vitalik Buterin has laid out a proposal titled the “Multidimensional EIP-1559” in a potential bid to improve the current hefty gas fee structure of the network.

Buterin highlighted that different resources in the Ethereum Virtual Machine (EVM) have different gas usage demands, and that there are different limits for short-term “burst” capacity as opposed to “sustained” capacity within the EVM.

The highly technical proposal basically boils down to multiple solutions that rely on “multidimensional” pricing, which calculates gas costs differently depending on the demands for certain EVM resources.

“The scheme we have today, where all resources are combined together into a single multidimensional resource (’gas’), does a poor job at handling these differences,” he said.

On-chain analytics provider Glassnode published a report on Monday that explored Bitcoin’s supply metrics at the tail end of 2021 and the start of 2022.

The report found that 76% of the total circulating supply of BTC has been moved to “illiquid” wallets that have no history of spending, suggesting that there has been a strong increase in BTC accumulation and hodling in recent months. Glassnode explained:

“We can see […] that over the final months of 2021, even as prices corrected, there has been an acceleration of coins from Liquid, into Illiquid wallets.”

South Korean tech giant Samsung unveiled an upcoming smart TV product line for 2022 that comes with nonfungible token support in the form of an integrated NFT platform app. The famous brand’s new TVs, such as the MicroLED, Neo QLED and The Frame, will all feature the app.

The company is aiming to cash in on a new trend by introducing the first-ever smart TV NFT explorer and marketplace aggregator that will enable users to browse and trade NFTs from the comfort of their sofa. The firm is gradually becoming involved with crypto and is currently working on NFT and Metaverse integrations with its other devices and services.

“With demand for NFTs on the rise, the need for a solution to today’s fragmented viewing and purchasing landscape has never been greater,” Samsung said. 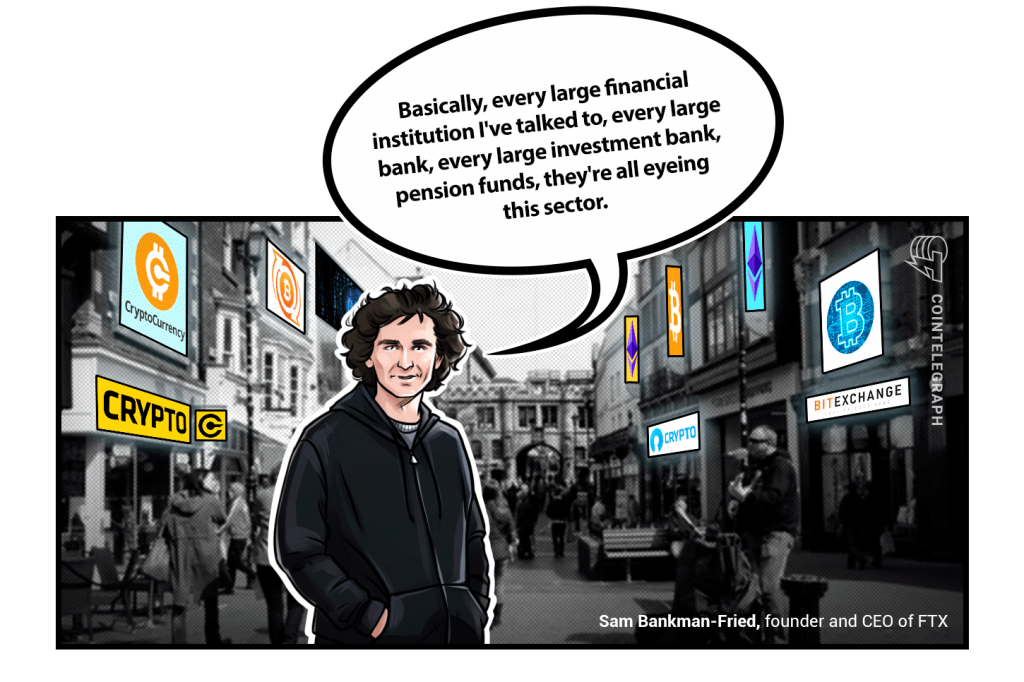 For more info on crypto prices, make sure to read Cointelegraph’s market analysis.

“I liked altcoins before altcoins were cool.”

“There is an old Japanese proverb that goes, ‘Beginning is easy, continuing is hard.’ The journey to change the world has only just begun. Continue on, Bitcoin!”

“You’re going to see a lot of movement in terms of doing authentication and insurance policies and real estate transfer taxes all online over the next few years, making NFTs a much bigger, more fluid market potentially than just Bitcoin alone.”

“Cryptos are tops among the risky and speculative. If risk assets decline, it helps the Fed’s inflation fight. Becoming a global reserve asset, Bitcoin may be a primary beneficiary in that scenario.”

“Sometimes the best time to buy is when things go down, so when they go back up, you made a good profit.”

“We’re busy turning your cash into future money — to the moon, apes!”

Prediction of the Week

After trading sideways earlier in the week, Bitcoin’s price took a nosedive on Wednesday, falling to $42,511, according to Cointelegraph’s BTC price index. After more sideways trading action, BTC continued its descent on Thursday, tapping $41,000.

In a recent tweet, Crypto Ed, a trader active on Twitter, noted the possibility that BTC’s price could fall below its September 2021 depths, which sits at $39,668 based on Cointelegraph’s index.

Aside from BTC technical analysis, other factors that could negatively affect the price include the Bitcoin mining situation in Kazakhstan and the Federal Reserve’s plan to unwind its stimulus program, according to former BitMEX CEO Arthur Hayes.

FUD of the Week

Within a week of reminding the community that it accepts crypto donations, the Mozilla Foundation announced that it had stopped doing so following an onslaught of negative reactions from the anti-crypto section of its user base.

The pushback was due to environmental concerns that some hold over crypto mining, with Mozilla noting that it will only resume crypto donations if the sector aligns with its climate goals in the future.

Mozilla co-founder Jamie Zawinski, who is no longer associated with the project, was one of the people leading the charge against the open-source web browser provider, and absolutely slammed Mozilla and anyone working on it.

“Everyone involved in the project should be witheringly ashamed of this decision to partner with planet-incinerating Ponzi grifters,” Zawinski said.

Decentralized crypto predictions platform Polymarket reached a settlement with the Commodity Futures Trading Commission (CFTC) to pay a $1.4 million civil monetary penalty over a failure to register with the U.S. enforcement body.

Polymarket lets users bet on the outcomes of event markets via binary options contracts, which the CFTC defined as swaps that fall under its jurisdiction. The firm was given a reduced fine due to its “substantial cooperation” with the CFTC and stated that it was “excited to move forward” now that the issue had been settled.

“All derivatives markets must operate within the bounds of the law regardless of the technology used, and particularly including those in the so-called decentralized finance or ‘DeFi‘ space,” said CTFC’s Acting Director of Enforcement Vincent McGonagle.

The Solana blockchain reportedly suffered an incident on Tuesday that caused the network to slow and transactions to fail. The community was debating online whether it was the result of another distributed denial-of-service (DDoS) attack or simply network issues.

Solana Labs CEO Anatoly Yakovenko also denied there had been a DDoS on this occasion, as he attributed the issues to the “pain of getting a new runtime commercialized.”

Here are three reasons why PlanB’s prediction isn’t accurate and why we can’t expect Bitcoin’s price to increase 10x after each halving.

Unlocking utility is key for fashion brands launching NFTs in 2022

2021 may have been the year for fashion NFTs, but 2022 will require brands to launch NFTs with utility to move the idea forward.

“Dubai is very crypto-friendly and blockchain-oriented — you can easily set up a crypto-related company in the DMCC Free Zone with zero taxes.”